Sheldon Cooper- Laney: After tripping in his first race,… 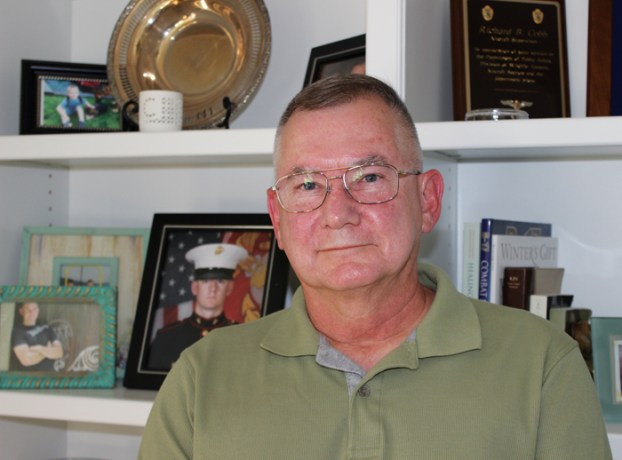 Richard Cobb’s wildly varied service career has taken him to Vietnam to fight with the Marines, to Europe and Africa, to Lewisville and Clemmons where he served as a deputy, to Alaksa where he served as a U.S. Marshal piloting a plane, even flying Gov. Sarah Palin at times.

Like his father, Richard Cobb decided to join the Marines. “My father served in World War II but never left the States. My brother was a Marine but never left the States,” says Cobb. Around Cobb’s 18th birthday he left the States and was sent to Vietnam. The young boy fought for thirteen months. “I saw a lot of ambushes here and there. At first, I was the fire team leader in charge of three.” Each time a ranking leader died in the line of fire, Cobb would get promoted. “A couple of months later, I got Corporal and had three fire teams under me. I had lots of close calls and got very lucky.” So close, in fact, Cobb said a machine gun round went in one side of his back pack and out the other. “I should have been dead three or four times.” Cobb survived the Battle of Khe Sanh. The eleven-week week siege was a bloody battle that left many wounded or dead. “I was one of the few who made it from the first day to the last.”

After his tour in Vietnam, Cobb was glad to be back home. “I was assigned to Camp Lejeune on a med cruise during which we were aboard an old troop ship from World War II and went around the Mediterranean making landings.” Cobb helped train French marines, as well as other foreign troops. Next, he was asked if he wanted to go to North Africa or Guantanamo Bay. He chose Africa. “It was very hot,” Cobb notes about his tour there.

Once Cobb was done with his service, he came home and worked on computer programming. However, he quickly realized he wanted to serve and protect again. This time, he began working for the Sheriff’s office. He was a patrol deputy in Clemmons and Lewisville for ten years. “During this time, I had to speak with U.S. Marshals about a mutual case.” Cobb was intrigued by the U.S. Marshals. “I said, ‘Guys, this looks like a pretty neat job. What do you do to get it?’” Cobb took a Civil Service exam, passed, and began training in Georgia. Eventually, he became the Supervisory Deputy U.S. Marshal in Winston-Salem.

After holding that position for about nine years, he got a call from his counter part about a job in Anchorage, Alaska. “He said, ‘Richard, I understand you have your pilot’s license. How would you like to work in Alaska?’” Cobb recalls. They needed someone to run the aircraft section, but it had to be a U.S. Marshal to do it. There were several other pilots, but Cobb would hold the seniority. “I asked my wife, and she said, ‘No way.’ The next morning while she was drinking coffee she said she thought it would be a great opportunity for the kids. They were five and seven.” In Alaska, Cobb would fly to even the remotest of places to catch a fugitive. Many criminals thought if they went to remote places in the wild frontier, the police would not come after them. “It was fascinating because one day, I could be out in the Aleutian Islands, and the next day, up on the Arctic Ocean looking for a federal fugitive. You never knew what you were going to be doing,” says Cobb. Cobb spent fifteen years doing that.

He retired for one year in 2006. Retirement did not last long, however. Cobb came out of retirement when he was asked to be a supervisor for the Alaska State Troopers aircraft section. “One of our responsibilities was supplying pilots for Governor Palin. Whenever pilots were off, I would fly her myself.” Cobb says Sarah Palin struck him as a person who was very capable. “The biggest problem she had was she was there for the people, not for the politicians,” notes Cobb. “It ended up being fatal for her because all the politicians ended up ganging up on her. She had a lot of headaches going but she took time to look out for individuals.”

Cobb also looked out for individuals in the line of duty for the majority of his life, finally retiring after two years with the Alaska State Troopers. His decision to retire arose largely from health problems from which he was suffering. Cobb discovered his health issues were due to his exposure to Agent Orange during Vietnam. Agent Orange is a herbicide and was used to destroy vegetation to expose the enemy. “We were told it was fine at the time,” says Cobb. “Once I retired, my wife said it was time to go back to North Carolina.”

Back in North Carolina, life is finally simple for Cobb. “We live on the Cobb compound,” Cobb jokes, referring to the plot of land he lives on. Two of his four kids are nextdoor neighbors living on the same plot of land. His grandchildren love to come over to visit their highly adventurous grandfather. “People will ask me, ‘What did you do?’ and I’ll say, ‘Where do I start?’” Cobb chuckles.

Cobb has seemed to easily change paths when opportunities were presented — and also made them occur when he believed the time was right for him. Either way, no one can accuse him of letting the grass grow from under his feet. He has lived the lives of several men with all of his career changes — with many of his decisions benefiting his community and country. To Mr. Cobb, thank you for your service and may we all be so lucky to live life as wildly as and as heroic as you have.

“Your Neighbor” is a feature by Jill Osborn. If you have a neighbor everybody should know, reach Jill at jill.n.osborn@gmail.com. Also follow her blog on parenting at MuchAdoAboutMothering.com/