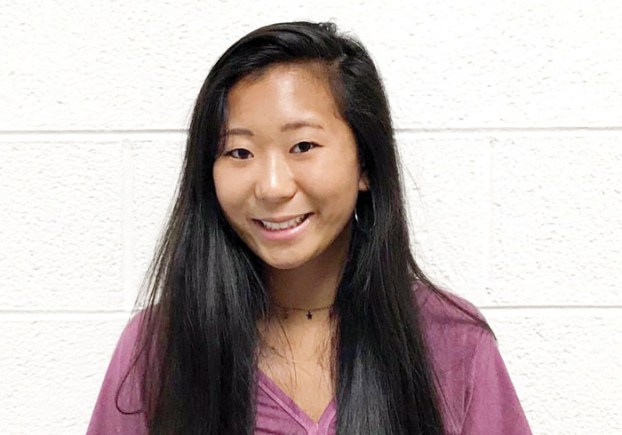 Each person has their own story to tell about growing up as a child, but for girls lacrosse player Chloe Christensen of West Forsyth, she really has a story to tell.

Christensen, 17, was born in Suzhou, China, and at 14 months old her parents left her in a phone booth. Somehow a police officer found her in a grocery store in China.

Although Christensen doesn’t know anything about her biological parents, it doesn’t seem to faze her.

“I was only about a year and two months, so I don’t really remember anything,” she said.

Although it’s not known why her biological parents decided to leave her in a phone booth, China has a one-child policy in order to control the huge population. And many families opt to keep boys rather than girls. According to an NBCNews.com story published last March, China began its international adoption program in 1991. Although adoption numbers haven’t been updated through the present, from 1999-2018 an estimated 110,000 children from China have been adopted, and of that 81,600 of those children have been adopted by American families, according to the State Department.

Enter Rod and Lee Christensen, who already had a biological son named Ben, but were looking to adopt. They elected to adopt a child in China. That turned out to be Chloe.

“We had a son and after we came up from that experience it was just something we wanted to do. We wanted to adopt,” Rod said. “We wanted a girl and if you do a little research into the girl’s plight in China it’s a mess. So, it just made sense to us. Nothing heroic. It’s just a great decision.”

Rod knows all too well about being adopted. He was also adopted. He grew up in the Children’s Home in Thomasville, was adopted and grew up in Pfafftown.

“I think that’s something that we’ve got in common that not everyone experiences, for sure,” he said. “We laugh about it.”

Rod said that he and his wife Lee used an adoption agency in Greensboro called Carolina Adoption Services. Rod and Lee went to China and Chloe was brought to them through her orphanage in Nanjing.

“I’m told the orphanage kind of matches a child with what they think is your family,” Rod said.

Once they arrived in Nanjing, the orphanage gave the Christensens their new daughter, Chloe.

Originally the Christensens were going to adopt two children, but there turned to be too much red tape.

“We intended to adopt a second, but things changed in China,” Rod said. “And the timetable got really long. And it didn’t fit with our family.”

The timetable was just too long for the Christensens.

“Chloe’s process was relatively short, but it turned into five years as we were in the next process,” Rod said.

Although there have been some bumps along the way, Chloe said she has no emotional scars from the experience.

“There’s a little group that we used to be in at Grace Connection,” she said. “I don’t know if you’ve ever heard of it. It’s like a little thing for people who are adopted. I don’t really keep in touch with them. That was kind of for our parents mostly to be all together with people who were going through the same thing.

“When I was little, I went through adoption therapy just because I had a lot of trust issues, going into a new family. But that was just when I was really young.”

She said that for the last 10 years, those trust issues are no longer with her.

Although she has proven herself to be a top-notch athlete, that wasn’t immediately evident as a child.

“When we got her at 14 months, she couldn’t even sit up on her own, but before long she was climbing out of her crib,” Lee said. “She’s always been competitive. Anytime the neighborhood kids were outside, she would switch her tennis shoes for her ‘fast black shoes’ (black patent leather) and race them. She always won. We still have all those ‘fast black shoes.’ ”

Much of Chloe’s competitiveness came from having a brother, who was an athlete and played multiple sports at Calvary Day School. Ben Christensen, who’s about a year and half older than Chloe, played basketball and swam there, in addition to running cross-country and track. Ben is a student at UNC Charlotte.

“He’s better in all the sports than me, but I would say he’s the reason I did play a lot of my sports is watching him play,” Chloe said. “He always beat me in everything.”

Chloe also was a student at Calvary Day, and she played soccer, basketball and field hockey, as well as running track and cross-country. The problem is, she fell in love with lacrosse and Calvary didn’t have a girls lacrosse team. So Chloe and family decided that she could transfer to West Forsyth her sophomore year.

“I just kind of got really addicted to it and stuff,” she said. “A lot of my friends started playing it in middle school. I don’t know, it’s probably how fast-paced it is, so being a midfielder I can go all over the field. So I can run back and forth the whole time and be engaged as much as I can.”

Her transferring to West Forsyth immediately made the Titans better.

“I knew that Calvary did not have a lacrosse team,” Coach Doug Brawley of West Forsyth said. “But we’re definitely glad people are thinking about us when they’re looking for places to play because she’s definitely been an asset.”

Brawley thought enough of Chloe that he made her one of his captains.

She has leadership skills on the field. “She gets along with everybody,” Brawley said. “She’s always inclusive of others on the team, makes them feel a part of the team. She tries to build up her teammates even if they have something they’re working on. Instead of pointing out the negatives, she always deals with them in a positive manner.”

Brawley knew that Chloe was adopted, but none of that has ever come up since she transferred to West Forsyth.

“To me if speaks volumes to her family — what great people they are, how welcoming they are — welcoming Chloe into their family.” Brawley said. “And those skills have apparently been passed on to her because she’s so open to accepting of everybody else on the team.”

All of her skills and leadership has helped the Titans prosper through the early portion of the season. Through Monday afternoon, West Forsyth was 4-0 overall and 3-0 in the Central Piedmont 4-A after its game with Reagan last Friday was rained out. The Titans played at home Monday night against Glenn and have another game Thursday night against East Forsyth.

“I wasn’t really sure (about the season). I wasn’t ready just because we only had a few seniors this year,” Chloe said. “I didn’t know a lot of the girls because they were a lot younger than me, so the freshmen, sophomores and some of the juniors I didn’t know. But we’ve been pretty good this year.”

One of West Forsyth wins came last week when it won 10-9 at Reynolds, which won the conference the last couple years. West Forsyth will play at Davie County on Tuesday and Reynolds will come to Clemmons the following day in the rematch. Chloe has flourished this season with 23 goals through four games, and she as already committed to play college lacrosse at Lenoir-Rhyne in Hickory.

“We really want to win it,” Chloe said. “This is probably our best year to beat Reynolds because they’ve been our biggest competition. I don’t think we’ve beaten them in the last three years, someone said. And so beating them the other night was a huge accomplishment for all of us.”

Chloe, who also waits tables at Carriage House restaurant in Winston-Salem on the rare occasions when she’s free, has also had a great season statistically even though the weather really hasn’t been conducive. In addition, this season was in flux because of COVID-19 that halted the 2020 season in March.

“We love being out there,” Rod said. “That’s really our thing. She’s played club for years. A couple of seasons, we traveled to Maryland with the teams. We really didn’t do that this year and part of last. We missed that. I’d say we mourned it in a way.”

So when the team returned to playing games earlier this month, there was glee amongst the family.

“It was super-exciting,” Rod said. “We were happy to be by the field.”

With a contracted season this year because of COVID-19 the season will be over soon and Chloe will start thinking about graduating and going to Lenoir-Rhyne in the fall.

“Not last year, but the year before we were able to play on their field against Hickory,” she said. “I loved their campus. But I went there when I was really young, maybe freshman year, and I went for a prospect day there and I really liked it. But I never looked too far into until probably the past year and a half.”