Coach Kevin Baity back as head of West’s softball… 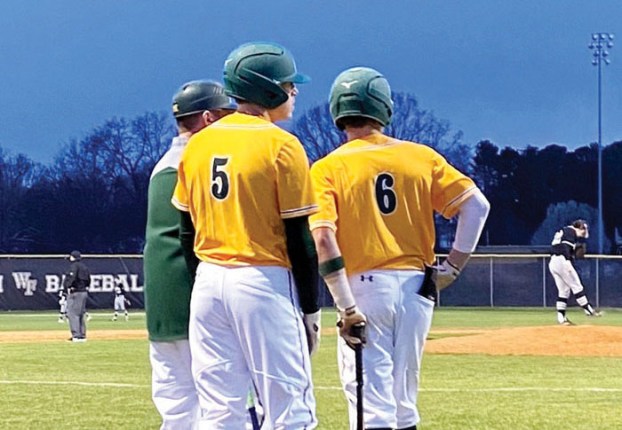 Several prepare for an at bat during a game last year.

The high school athletics season started late this school year because of COVID-19, so of course, it’s going to end late.

Five sports — baseball, boys and girls track and field, wrestling and girls tennis — started their seasons this week for West Forsyth, as well as schools all across North Carolina.

At West Forsyth, the baseball team only played four games last season before the season was abruptly halted on March 10, 2020, because of COVID. Track and field had barely started its seasons last year before ending. Girls tennis usually starts in August and finishes in mid-fall, but started late this school year because of COVID protocols. And the same thing happened for wrestling, which usually starts in November and ends in February.

So, it just left a bad taste in the mouths of the teams and coaches who barely had a season last spring. One of those coaches is Brad Bullard, who is the baseball coach at West Forsyth, which was 3-1 last year.

“It was tough,” Bullard said. “Obviously you’ve got seniors out there. I felt like we had a great team last year…We had just come off a big win. We went to Alexander Central earlier that week, looking back at it now, I guess that was the last week of the season. We faced a kid going to Clemson, and I think we beat him 3-2.

“And we were supposed to play West Wilkes that Friday night, and I remember getting a phone call Thursday, Thursday or Friday. I think Forsyth County allowed us to play, but Wilkes County shut it down And that was it. Literally, it was that abrupt.”

Bullard said he asked Athletics Director Mike Pennington of West Forsyth and former Principal Charles McAninch about adding a game that Friday, but it never came to fruition.

“I was wanting to play because I knew this was probably it,” Bullard said. “I was really, really wanting to just get one more game in. And I know a couple of other Forsyth County teams — I think Mount Tabor and Reynolds played that Friday night.

“You know at that point, after talking with Mr. Pennington and Mr. McAninch, you sort of saw what was coming. And sure enough, that was it.”

Because of restrictions, both with the Winston-Salem/Forsyth County Schools and the NCHSAA, teams went well into the fall before even having workouts. Bullard said he had no contact with his players until after New Year’s.

Flash forward to now, West Forsyth has gone through two weeks of practice and has its season-opener Thursday night at home against Mount Tabor. West Forsyth travels to Charlotte on Friday to play Providence. This week’s opening slate is part of a 13-game schedule, which includes 10 conference games in the Central Piedmont 4-A.

Bullard said he’ll be relying on three juniors — second baseman Reid Withers, shortstop Payton Martin, and right fielder Bryson Chandler. Catcher Banks Cox, a senior who has signed with UNC Greensboro, is having arm troubles, and is questionable to return.

“We’ve got some pop, but I think for us, we’re going to have to go station to station, and try to get singles and doubles, and run the bases well,” Bullard said.

As for pitching, Bullard said senior Kobie Cushing, who has signed at Queens, will likely be the No. 1 starter.

“We’ve got a lot of arms,” Bullard said. “We’ve got some depth. I sort of joke around, I told the guys, we sort of be like the Tampa Bay Rays this year, and just switch it up. We’ve got a lot of guys that can do a lot of different things, different arm angles, and left side and right side. And that might be what we have to do this year to be the most effective.”

The conference schedule opens next Tuesday with a home game against East Forsyth, and the Titans travel to Kernersville two days later for the rematch with the Eagles. Bullard sees Reagan as the favorite to win the conference, but the conference is loaded with good teams.

“I’ve just tried to emphasize to the guys, man, let’s just come out here and give it our all every night and we’ll see what happens.”

The West Forsyth track-and-field team has been one of the best teams in the area and the state for years. That should be no different this season with Coach Nathan Newsome. The boys won the NCHSAA Class 3-A state championship in 2017, and in 2019, the last year they had a full season, they finished runner-up to Cary. The girls finished ninth in 2019.

The Titans opened their season this past Tuesday at Mount Tabor. And almost all track-and-field athletes, they didn’t have the benefit of indoor track this season, which was canceled because of COVID-19. However, many middle- and long-distance runners ran cross country in the fall and winter.

“For the track kids they since I guess last January, or February would’ve been it,” Newsome said. “It’s over a year layoff, so a lot of rust as far as that goes…Without indoor track, it’s pretty weird, but the kids are excited about getting back to some sense of normalcy.”

The boys should be strong in middle- and long-distance running with senior Jackson Nichols (800, maybe 1600), senior Moey Ghobrial (800), senior Jeremy Eldredge (3200), and sophomore Wesley Haggstrom (1600, 3200). Sophomore Brandt Doty won the 1600 time trial, but he is injured and won’t be available until later in the season.

In the sprints, the Titans will rely on junior football players Don Robinson (200, 400, relays) and Malachi Jowers (utility sprinter, one of the team captains), as well as sophomore Ethan White, who is a hurdler.

Freshman Andrew Steele will run the 100 and some relays, and will do the long jump. Newsome said they need to improve in the shot put and the discus, but junior Cadin Martin is a pole vaulter and distance runner, which should help the Titans.

“We kind of have made our living off field events, use a lot of those football players — those athletes to fill in those sprint spots,” Newsome said. “And our distance program is usually pretty good, so we’re able to kind of balance out.”

“I hope to compete for the conference championship,” Newsome said. “Reagan typically is strong. They always have a strong sprint group. And they usually have some good jumpers. They’re well-rounded.”

The girls should also be strong, with one of Newsome’s best runners best somebody he’s very familiar with — his daughter, Blair. Blair Newsome will compete in the 800, 1600 and the 4×400 relays.

“I think Reagan is probably favored (to win the conference title),” Nathan Newsome said. “Hopefully we can upset them. We’ve just kind of gotta see how things shake out.

“We haven’t had any meets yet. You don’t know what COVID’s done to people.”

Wrestling was in limbo up until recently before the state gave the go-ahead just before practice started earlier this month. That was a tough pill to swallow for fourth-year coach Jason Hooker, who helped guide the Titans to an NCHSAA Class 4-A dual-team runner-up finish in 2018, and last year, they lost in the regional final.

“It’s been tough,” Hooker said. “It’s been tough as a coach and tough on the athletes. Seeing kids graduate early, kids going ahead and signing up for the military…It just made it very difficult.”

Hooker said for much of the offseason the team could only have 45-minute workouts several times a week, and for most of them, they had to be outside. In addition, seven wrestlers from last year aren’t wrestling. And because of COVID protocols, they had to split practices.

The regular season started this past Tuesday with a tri-match with Newton Foard and Surry Central. And on Saturday, West Forsyth has another tri-match with Southeast Guilford and Robbinsville.

“I made a tough schedule because I was thinking we were going to have a really, really tough team,” Hooker said. “And we’ve still got real tough guys. We’ve got some young spots where we would’ve had seniors in that make a difference.”

“The good thing is I think we’re at the end of this pandemic,” Hooker said. “I’m not a scientist or a doctor, but I think — you’ve got kids in school, you’ve got kids taking away a lot of the ordinances that were set in place. People aren’t getting sick. A lot of people are getting vaccinated, and some aren’t. I think hopefully we’re seeing the end of this thing.”

West Forsyth has 13 tri-matches scheduled, plus the conference tournament. Teams can wrestle in the regular season until June 11. One big change this year is there will be no dual-team state tournament. Therefore, the individual regionals are June 15, the girls invitational is June 19, and the state championship is scheduled for June 26.

West Forsyth should be in the top three in the Central Piedmont 4-A with Davie County and Glenn.

“It’s hard to know where everybody’s at,” Hooker said. “Everybody’s probably going through the same stuff we are.”

The girls tennis team at West Forsyth hasn’t played since October 2019. Girls tennis usually starts in August, so it’s been eight months since it normally would’ve started, plus it’s been about 18 months since the girls last played.

That was tough for the Titans, who finished with 2019 with an overall record of 12-3 and 8-2 in the Central Piedmont 4-A, with both losses being 5-4 to Reagan, which finished undefeated in the conference. West Forsyth lost to Cornelius Hough 6-0 in the first round of the NCHSAA Class 4-A state tournament in 2019.

“We’re happy to have a season because we basically missed ours in the fall,” said eighth-year Coach Shana Krenz. “We’re glad to get it in.”

Krenz said she’s not sure who will play doubles in any given matches, adding that the doubles lineups will likely change as the season progresses.

“It may not be an ideal situation,” Krenz said of the delay to the season. “But I think the girls, they’ve adapted. These are smart girls. They excel, they’re multi-talented, they’re musicians, scholars, artists. Tennis is only like one part. So we’re happy to have a season, but we weren’t on pins or needles, or anything like that.”

Although Reagan finished undefeated in the conference during tall of 2019 both matches against West Forsyth were nail-biters. That gives the Titans hope that they can sneak past the Raiders and win the conference.

“In my opinion we only lost and came in second the last time we played,” Krenz said. “It came down to two tiebreaks against Reagan. And so I considered us — it could’ve gone one way or the other. This year, I don’t know because I have no idea. I haven’t seen any other teams.” 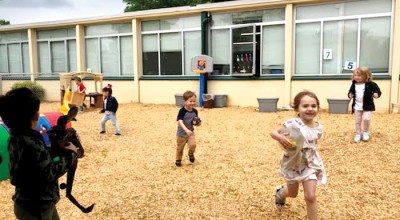