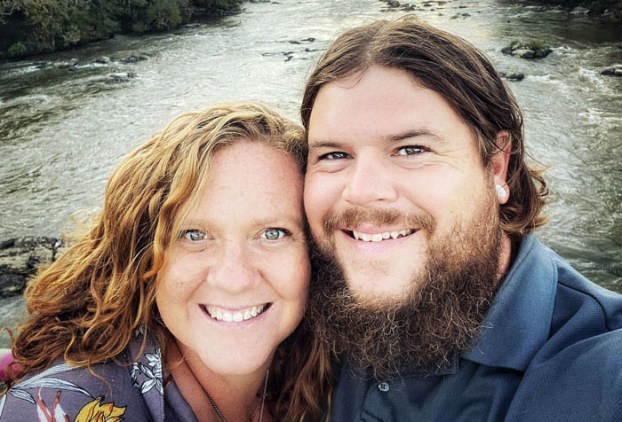 Dave Clark, with his wife, Lauren.

Dave Clark grew up in Pleasant Garden as the oldest of two children in his active family. “Early on, I developed a love for being outside in nature. My grandfather and uncles would take me camping, boating and fishing. It was always a memorable experience for me,” mentions Clark.

Clark’s love for being outside led him to Western Carolina University in Cullowhee. “When I toured the campus, I appreciated that it was in the middle of nowhere and so scenic,” says Clark. “I was drawn to computer information systems initially. After I graduated, I started working at Circuit City in the camera department. It was during that time I decided to go back to school at Randolph Community College to study photographic technology.”

Clark’s decision to study photography proved to be one that felt natural immediately. “The program I chose to focus on was commercial photography work,” explains Clark. It didn’t take long for Clark’s talent for lighting and enhancing pictures to get noticed by his professors. Clark was frequently asked to help first-year students with explaining and providing hands-on lessons with this skill. “It was during a computer lab where I was helping out that I actually met the love of my life, and future wife, Lauren, in 2008.” Lauren and Dave clicked quickly with their passion for the art of photography and active lifestyles. “Lauren didn’t go camping like I did as a kid, but she quickly took to it,” Clark explains. “She had always been active in sports and liked being outside. We enjoyed taking trips together.”

After graduation, Clark freelanced for a while for other photographers and gained more hands-on experience. “When Lauren graduated, we decided it made the most sense for us to join forces professionally. We were married on 01/01/11 and our partnership took even more meaning. We named our photography agency, DesiLu Portraits after our dogs. Lucy was the dog that Lauren had adopted during college, and we had rescued Desi together.” The Clarks brought their diverse backgrounds and interests under one house with their photography business.

As the Clarks began their lives as small business owners and newlyweds, they decided to expand their furry family. “We had gone to a local shelter and explained that we were looking to adopt a dog on the smaller side. They showed us some photographs, and one of the dogs that was shown to us looked horrible in her photo. When we met her, she looked nothing like the photograph, and she was this adorable fluffy and sweet dog with cataracts and was mostly blind. We ended up adopting her. She is now affectionately known as Bootsie, also the catalyst for our wanting to help photograph animals in shelters. We realized that people might not have given her a chance based on her photo, and that was something we could help with,” says Clark. The DesiLu team began volunteering their time to help initially with Project Pearl, a local Winston-Salem rescue that was disbanded after the founder moved out of state. Currently, they now help at the Forsyth Humane Society. Lauren and Dave take professional photographs of the dogs for their rescue which allows them to get exposure in the community that truly showcases the animals’ personalities. “We had sent over photographs to them of a dog we fostered through their program. We told Forsyth Humane Society that we wanted to do our part to help animals that might not get a second chance without spreading the word. That’s how we began helping them regularly,” says Clark.

Clark’s photographs of shelter animals are shared far and wide on social media. “Lauren and I came up with another project that helps dogs that have been in rescue care for a while. We started ‘Foster Friday’ where we have dogs come in for pictures that have had a hard time getting adopted while in foster care. For instance, our dog Desi is a black dog, and statistically they spend a longer time in shelters. Helping the pups that might need that extra marketing is our goal. If there is a dog that is especially active, we’ll feature them in a kayak or with running gear on just to make it a little different than a standard kennel photo,” explains Clark.

Clark also does routine fundraisers to help raise awareness for multiple rescues in the area. “We recently did a ‘K9s for Kittens’ fundraiser where we donated a free photo session if the participant brought in canned or dried kitten food. Through the help of our clients and participants we were able to donate hundreds of pounds of kitten food to both the Humane Society of Forsyth and Davie counties. It is kitten season and dog food is donated typically over cat food,” says Clark. “We like finding unique ways to help and encourage community participation.”

The upside to helping shelter dogs has been that Clark has been able to really hone family photography skills when a dog is included. “Dogs are our family. A lot of times people say that their dogs are too crazy to include them in their family portraits. But we want to be the photographers that you feel comfortable bringing your dog to the photo shoot. We photograph pets and the people that love them,” mentions Clark.

Clark has also continued to incorporate his love of nature with his photography business. “I have traveled to 17 different National Parks and have loved documenting each adventure. Whenever we take our vintage trailer camping, hiking or kayaking, I’m always on the lookout for ways to capture the background,” says Clark who has his prints on display at www.desiluphotography.com

Our neighbor’s adventures and philanthropic spirit remind us that it’s possible to work and play simultaneously.