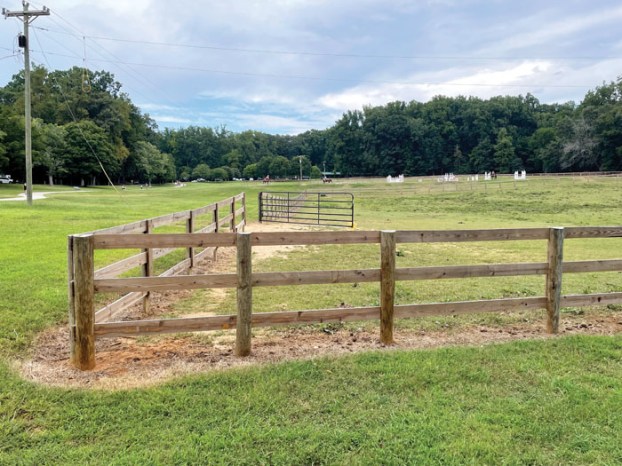 This is a view of the recommended site in Tanglewood Park for Forsyth County’s proposed 50,000-square-foot, agricultural multi-use event center. Photo by Jim Buice, For the Clemmons Courier

For residents of Clemmons and Forsyth County, there’s one more opportunity to have public input on a proposed 50,000-square foot, agricultural multi-use event center at Tanglewood by participating in an online survey located on the county’s website, www.forsyth.cc/parks, through Sunday, Sept. 12.

The $5 million project, part of a $15 million County Parks and Recreation Bond passed by voters in 2016, was to develop, plan and construct a facility.

According to the county website, “after studying numerous sites, staff made a presentation to county commissioners in a publicly televised and live-streamed meeting on Nov. 19, 2020, to recommend locating it at Tanglewood Park. After the county commissioners were briefed in a public meeting in July on a staff recommendation for a firm to design the facility and, if the design was later approved, to also build it, notable public opposition was expressed about the project.

The county then delayed consideration of the project and its potential location at Tanglewood, proceeding to hold a couple of public input sessions in late July (at the Red Barn in Tanglewood) and early August (at the Forsyth County Government Center).

The website states that staff will report the results of the meetings and the survey to the commissioners as they decide the next step with this project.

During the public meeting at the Red Barn, where staff heard strong opposition to the event center coming to Tanglewood during an overview of the project with a question-and-answer session, County Manager Dudley Watts said, “We will not put it here if you don’t want it here. “If this community doesn’t want the facility, I don’t believe the county commissioners would put it here.”

Opponents to putting the event center at Tanglewood have created a website, https://tanglewoodeventscenter.com or savetanglewoodpark.com with lots of information, links to news stories and an online link to sign a petition in opposition while announcing the creation of Save Tanglewood volunteers.

Meanwhile in the previous Clemmons Village Council meeting on Aug. 23, six opponents spoke against the project during public comments, including two who focused on the “horse” angle of the event center.

Betsy Nowell, who lives in Advance, said she and her mother have had one to four horses at the Tanglewood stables for 48 years and that she disagreed with the proposed site for the event center, calling it a “terrible fit at the stable area, which is basically a pleasure barn.”

Nowell said that her mother’s horse is half-blind and would have to be moved away from Tanglewood to another facility and that her horse has a history of gastric ulcers brought on by noise and stress, and also would have to be displaced.

“Other horses at Tanglewood have similar situations. My horse would not be able to stay in the barn or in that pasture with the noise of either the construction or the events going on. This is a beautiful, tranquil green space for walkers, bikers, dogs, children, horses, and we all coexist. I feel like this event facility would destroy that peace.”

Eberhard Mueller-Heubach said he moved to a small farm next to Tanglewood with his wife, son and four horses in 1989 and was delighted to live beside “the crown jewel of nature in Forsyth County.”

He said, as horse lovers, they were pleased that there was an annual steeplechase but disappointed that it failed because of poor attendance and that this project at Tanglewood would be an irresponsible waste of taxpayers’ money. He added that with the space needed to accommodate  this “ill-conceived” event center, the horse barns would be pushed back against the homes on Tanglebrook Trail, “whose house values would plummet,” and that “large areas of the nature park would have to be deforested.”

Charles Sherrill, who lives in Clemmons West, offered his take on the project: “I would submit to you that the event center will go in Tanglewood or it will go nowhere because Tanglewood has four assets that no other park has — a steeplechase track, parking for 20,000 spectators, a staff to run the event that is experienced with the light show, and easy access to the interstate. Now this is not anything that has been put into the record by the county commission, but I think it is clear from the history of this project that that is what is going on.”

In an unrelated matter, the council called a meeting Tuesday afternoon, by the direction of Barson and councilman Mike Rogers, to consider Resolution 2021-R-12 encouraging all Village of Clemmons citizens and visitors to wear face coverings indoors and to protect themselves and the community from the spread of COVID-19.