By Janie Peterson
For the Clemmons Courier

Lewisville’s poverty rate of 7% is seven percent too much for West Forsyth High School sophomore Aiden Reavis. So when financial secretary Darlene Burris of Lewisville Middle School proposed that Reavis help them build a “Little Pantry,” he decided it would be the perfect idea for his Eagle Scout project.

The “Little Pantry” is a box on the Lewisville campus where residents can donate food and other non-perishable items such as diapers and school supplies. Donations benefit anyone in the community, not just students at the middle school. It operates on an honor system of “give what you can; take what you need.”

Reavis said that though he was happy to do the project, it was stressful because it needed to be completed before the school year began.

“I was kind of on an accelerated timeline, and it probably took me about a month from learning about it until I had it finished. I feel a lot of relief now because I’ve been trying to find a project for about a year and a half,” he said.

Luckily, Reavis was able to get plenty of help from friends and family, including his younger brother, Alex Reavis, who is an eighth grader at Lewisville.

“I’m just glad that I can give back to the community because my brother goes to that school — a lot of his friends and people that I know go to that school. I live in Lewisville and know a lot of people who definitely need the help, so it makes me feel good that I can kind of give back,” Reavis said.

Aiden is the son of Shannon and Bryan Reavis of Lewisville, and his close relationship with Alex serves as further reason that he is so passionate about the project. 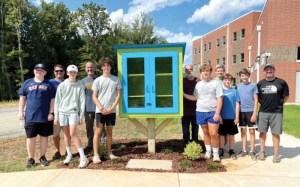 “Me and my brother, I feel like we’re pretty close. We’re only two years apart, and we like different things, but I still try to engulf myself in the things that he likes and he kind of does the same for me,” Reavis said.

Reavis has been a Boy Scout for three years, and though he still has some paperwork to complete before graduating to Eagle Scout, he already has the character to inspire many future scouts.

“In my troop, I have positions of responsibility and I like being able to lead the people that are younger than me. I feel like that’s kind of the coolest part,” he said.

Beyond his involvement with scouts, Reavis plans on participating in wrestling, Spikeball and the Mountain Biking Club at West Forsyth High School this year. He also has an Instagram account where people can buy his handmade rings.

“I was trying to make a little bit of extra money. I enjoy doing it and I like the rings. I saw some things online about how to make it and I started trying to do it and some people said that they would buy them, so I started selling them,” he said.

Reavis’ creations clearly make a difference in the community, and he hopes that both the students and staff of Lewisville will enjoy contributing to the Little Pantry. The school’s student council is taking responsibility for keeping it filled in the days to come. Any resident who wishes to donate may bring items to 1115 Lewisville-Vienna Road.