1 week ago by Mike Barnhardt.

Buice column: Residential development: Is it a losing proposition?

Like many others in Clemmons, Allen Daniel wasn’t real happy when he heard that the village was considering raising the tax rate from 11.5 cents ... Read more

I once loved to play golf. Two or three times a week, sometimes more, I would hit the links just to knock a little ball ... Read more

You work third shift, and you’ve put in a long, hard night at work. You get home, ready to relax, but the kids are just ... Read more

After enjoying quite a few films during the RiverRun International Film Festival in 2019, I looked forward to even more last year. But then along ... Read more

I’ve heard and seen enough about the Tulsa race riot of 1921. If I had heard of it before this year, it didn’t make a ... Read more

It was an early morning in August of 1945. The United States, with the help of Davie County hero, the late Tom Ferebee, had just ... Read more

By Tim Istock For the Clemmons Courier Recently, our 12-year-old senior canine, Maggie, an adorable if not admittedly quirky cocker spaniel, has been acting stranger ... Read more

The scoop on Stormwater

By Shannon Ford For the Clemmons Courier What is stormwater and why should I care about it? When rain, snow, or another type of precipitation ... Read more

Yes, I got the COVID-19 vaccine — the Johnson & Johnson one-shot deal. No side effects whatsoever. For months leading up to that day, I ... Read more

Buice column: Yum: Steak on a Stone, fries in a sandwich

Ever heard of eating a steak on a stone? Or how about french fries in the middle of a sandwich? Well, on my recent excursion ... Read more

Editorial: Even one of Davie’s best ‘Afros’ didn’t impress the coach

He could hit a baseball farther and harder than anyone else on our Little League baseball team. I called him Hank Aaron. Not knowing at ... Read more

As I get older, my arms are getting shorter. My walk, once straight, elegant and determined — is now choppy and awkward. My speech is ... Read more

Yes, Big Brother is watching us. Almost every move we make. I’m talking about cameras, and our reliance on them may be going a bit ... Read more

When I signed up along with a group of fellow explorers to walk in the footsteps of the pioneers as part of the Shallow Ford ... Read more

By the Coalition for Equity In Public Education The School Choice application season for children starting kindergarten for the 2021-22 school year in Winston-Salem/Forsyth County ... Read more

On the first day of the week, very early in the morning, the women took the spices they had prepared and went to the tomb. ... Read more

Letters to the editor — April 1

I’m celebrating St. Patrick’s Day this year the same place I celebrated last year — at O’Callahan’s Publick House in Downtown Mocksville. I was there ... Read more

Barnhardt column: Spring is the favorite season for a reason

Buice column: Will we ever be able to hug and shake hands again?

In some ways, it seems like it was only yesterday, but then again, it feels like it was a long time ago. A year, in ... Read more

Tim Istock column: Pass the peas, please … right on by!

By Tim Istock For the Clemmons Courier I’m not exactly sure when I officially became a picky eater, but I strongly suspect I was born ... Read more

Walking through the grocery store on Saturday morning, my big head got in the way. One of those little straps that held my face mask ... Read more

There weren’t a lot of frills to the house my family grew up in off Oak Grove Church Road near Mocksville. It was an old ... Read more

The morals of a nation Something is happening in America that is un-American. We are being told to shut up. Social media platforms run by ... Read more

Counties once again looking to operate in the dark

By Philip M. Lucey Like a bad penny, legislation to hide public notices from the public is back in N.C. General Assembly. House members have ... Read more 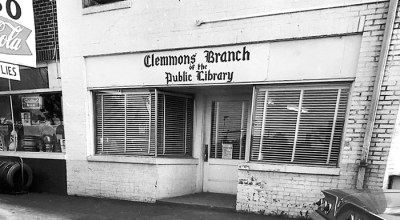 Buice column: The early days of the Clemmons library

When Mary Cameron moved to Clemmons in 1984, she recalls having a hard time locating the local library. “I found out it was in where ... Read more